Hey, buddies! We’re back with news regarding our Scoutmaster Season Voice Actor Applications we posted at the end of May, as well as updates regarding the Camp Buddy Spanish and Portuguese translated version! Please make sure and read the whole post for full information about these two topics!

Hey, buddies! We’re sorry for the delay on this update, but there were so many awesome candidates who applied for the new character roles, it took us quite a long time to go through everyone! After careful consideration, we’re happy to announce that we’ve chosen actors for all four characters! You can check out the full list below: 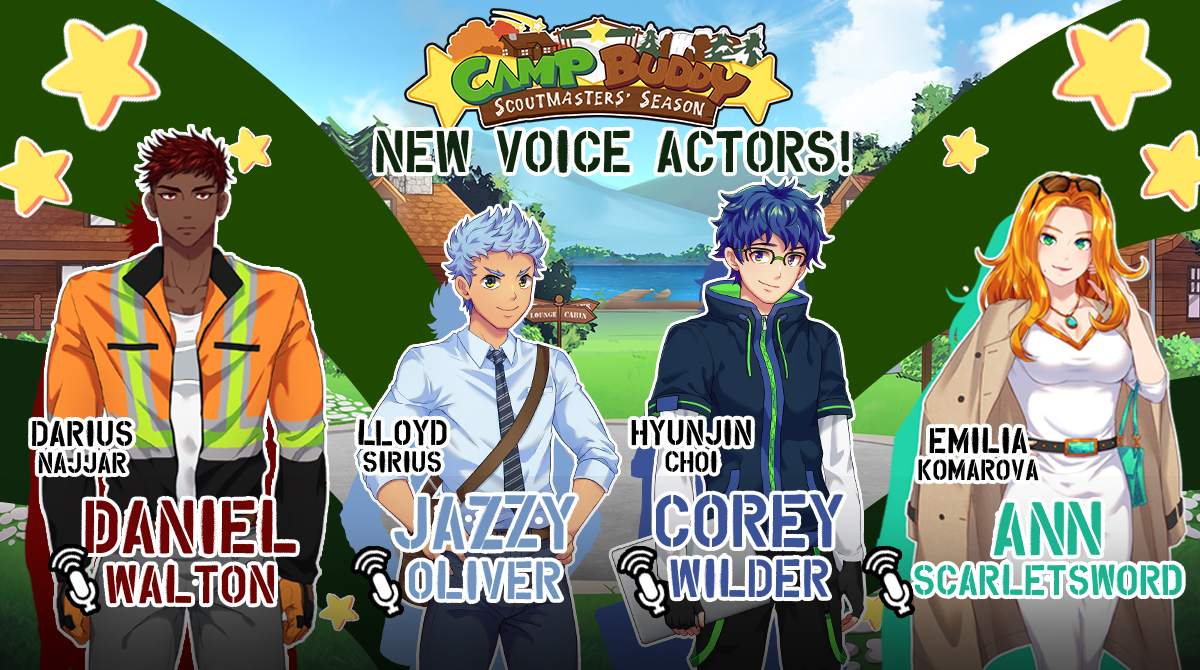 We can’t wait for them to bring the characters to life! We also have a surprise announcement – through our searching, we also found a new voice actor for both Hiro Akiba and Yoichi Yukimura, Ty Coker! Both of these characters will only play minor cameo roles in Camp Buddy: Scoutmaster’s Season, but we’ll be excited to continue working with Ty on them in future works as well!

Thank you again to everyone who applied, we loved hearing all of your demos and your enthusiasm for the characters! Please feel free to apply again next time we make a casting call as well!

The last time we updated everyone on our translation team’s progress, we were excited to announce that the Spanish translation of the game had been completed and we were in the process of gathering Beta Testers for it. Beyond that, we had also just hired our Portuguese translation team and it was getting started.

Now, we’re happy to say that the Portuguese team has fully finished translating the game! We’ve also gathered Beta Testers for both the Spanish and Portuguese versions of the game, and they’re hard at work finding all the bugs that they can and squishing them so that you all have the best experience when playing! You can check out everyone on the team below:

We’d also like to show you guys a few samples of the Spanish and Portuguese versions:

We know that everyone is excited for these versions, and thank you all for your patience while we go through the final beta testing phase! Once it’s been completed, we’ll be releasing a version 2.3 of the game in a free download link for everyone who owns the game, and updating the copy in the store to contain the new translated versions! We don’t have a set release date yet, but please stay tuned for more info as we get closer to completion of the testing period!

That’s all for now buddies, but please stay tuned for another Camp Buddy: Scoutmaster’s Season Development Update at the end of August 2021! In addition to that, don’t forget to take advantage of the discount we have going in the store from now until the end of July! You can see full details about that here:

Thanks again for your support, buddies! We’ll see you again soon for more Merch Updates, as well as Development Updates!

Hello! I’m just curious: why isn’t Shouta Sensei Hiro’s and Yoichi’s voice anymore? Yuri changed too, but I couldn’t find info on it.

From what I’ve read Shouta is *very* religious and regrets being in Camp Buddy and doing a game/ voice work that was against his morals. He also supposedly turned down a voice over for a science project because he doesn’t believe the Earth is billions of years old, something they wanted him to mention, and he wanted to mention that Christians believe it is only thousands of years old.

Do you know when it will be available with German subtitles?
I wish you a nice week!
P.S. your drawing style and this game is absolutely great 🙂 !!!

I wished I did

ohhh someone else from Germany! ✌️

We will be posting an update within this month, we apologize for the delay! We are doing our best to meet our targets, and want to make sure we have plenty to show everyone!

lmao the original game got pushed back for like a year. “Keeping promises” is never really their strongest suite.

Please try not to bash them during the process. Sometimes game developers can’t make it to the due date they set for themselves to ensure the quality of the product! I for one prefer waiting a bit longer than receiving a mediocre product! I’m sure they are trying their best for all of us!

so where’s the next update ?

We will be posting an update within this month, we apologize for the delay! We are doing our best to meet our targets, and want to make sure we have plenty to show everyone!

Japanese language translations will be considered for development after Spanish and Portuguese versions have been released. Please stay tuned!

Is there one? Last I checked, they dropped it cause the port was being complicated. Did they actually manage to finish it?

when is it coming?

I wish there will be a camp buddy scout master season on Android version because I can’t carry my computer ?️ any where. Please I think a lot of Android users are going to be happy if there’s a Android version and I think more BUYER’S of the game

I wait for too long

I hope it will be in German soon.
Then I’ll buy it right away!
can not wait ?

Hopefully it will be out soon! In German ?

At first I thought it was just a normal H game but I was wrong it was the best game I’ve ever played
I couldn’t help myself. Im falling into it
Its so happy and sad at the same time

Hoping for a android apk for the scoutmaster season

will camp buddy scoutmaster avail on a mobile phone?!

Can someone please explain what the hell happened to Hiro/Yoichi’s VAs?
No one will ever replace them.

I want you to add Japanese as well

when could we have a chinese translation version? i’ll be glaaaad to help if you guys are intended to make one!!

does the developer have any intention to make Camp Buddy 2 (continuation of camp buddy) ? I believe im not the only who wanted answers and im just as desperate as they are ?

Hi!! Can ask how can I update the app? I’m currently playing it in my android phone!! Thank you in advance☺️

How about the Android Version?

Hi I want this game

Excited to see what Ty has in store for us as Yoichi and Hiro! Looking forward to it <3

Why did they change the voice of yoichi and hiro? ☹️

I’ve heard that the guy apparently didn’t want to have anything to do with Camp Buddy anymore because of troublesome fans.