Hey, buddies! We’re back with another development update for Camp Buddy: Scoutmaster’s Season! The following post contains information for all fans of BLits and Camp Buddy, so please read below for full details!

We’ve got a bunch of new topics to cover regarding Camp Buddy: Scoutmaster’s Season, so make sure and check out all the topics below for a full update on development progress!

In addition to this, we’ve also been working on the two character routes, featuring Aiden Flynn and Goro Nomoru. So far, we’ve established a general story pattern for both characters, and are already halfway through writing Aiden’s route! We anticipate finishing his story soon, and tackling Goro’s soon after!

Next, we want to show you guys some new backgrounds that the team has been working on – featuring the Camp covered in snow! It’s called ‘Scoutmaster’s Season’ for a reason, and you’ll be able to see Camp Buddy for the first time in both Autumn and Winter! 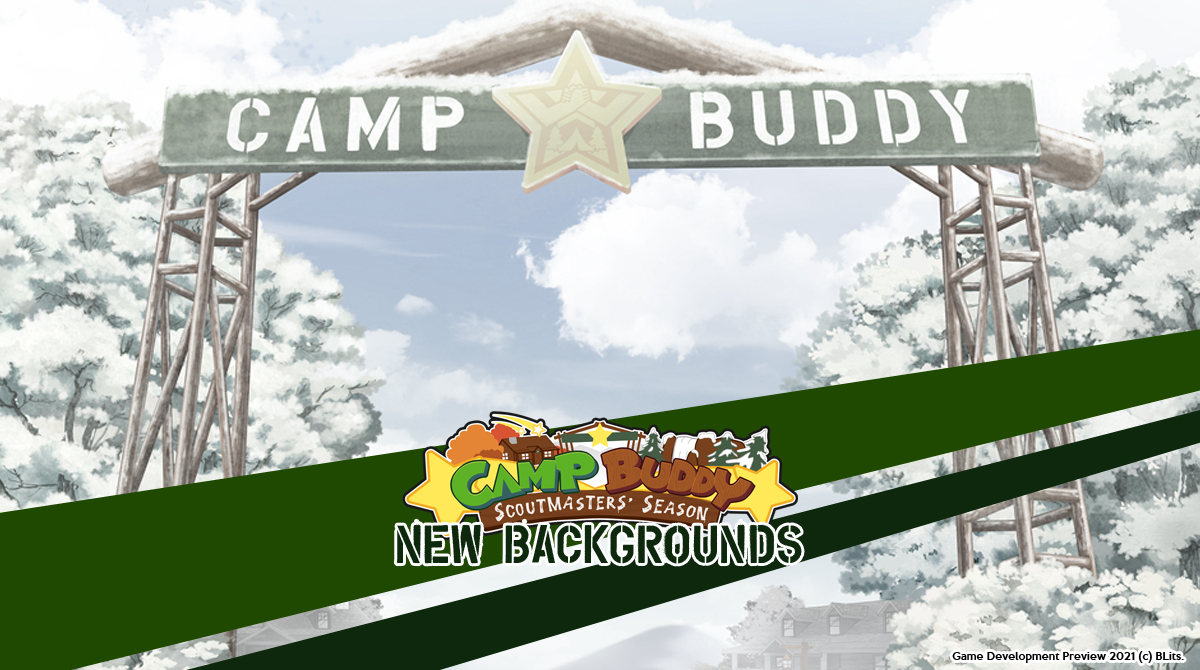 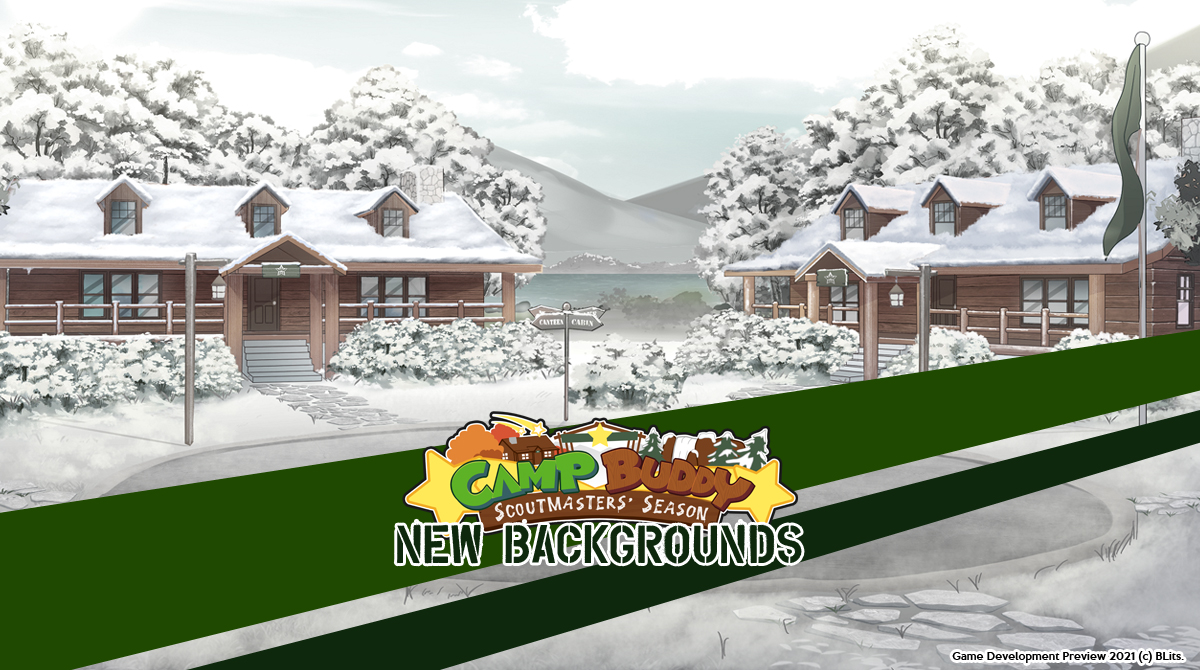 We know everyone is eager to see the new artwork featuring in the game, especially when it comes to the sexy scenes~ Well, wait no longer, as we have some sketch previews ready to show you all! 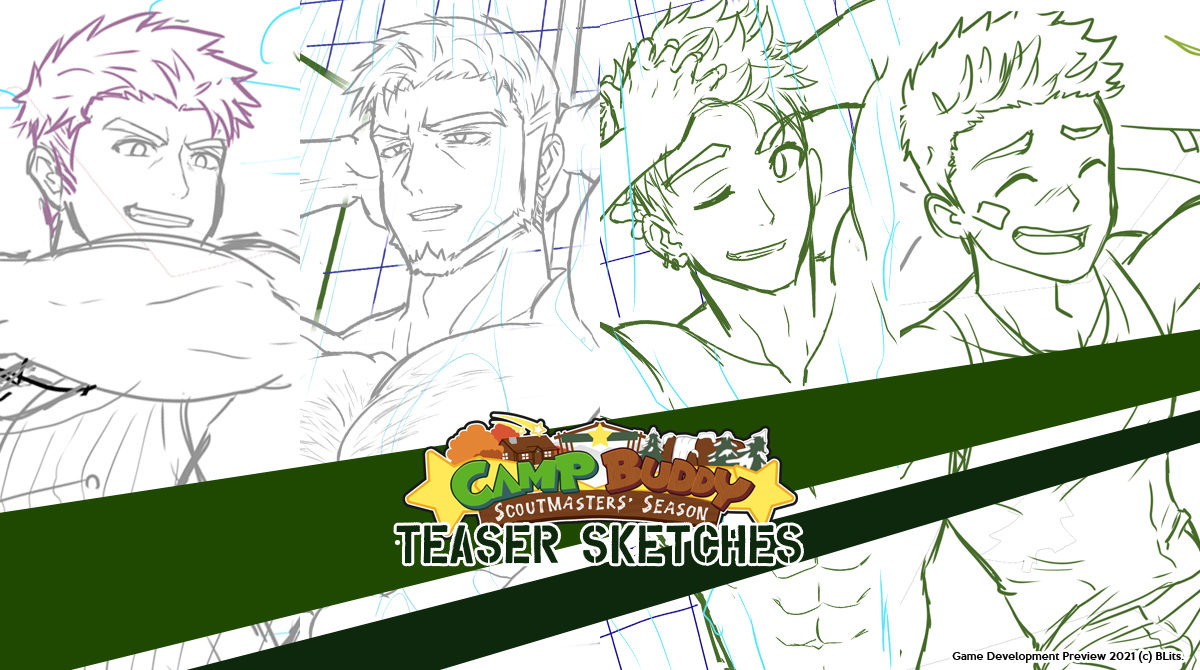 These scenes will feature in Scoutmaster’s Season, and there’s a lot more than this, but we’ll have to keep the rest to ourselves for now!

Like we teased last time, we have a couple of cameos showing up in the story, and the two we’re sure you’re most excited to see are none other than Taiga Akatora and Yoichi Yukimura! After the events of Camp Buddy, both of them are staying at the camp for the year and helping out, so they’ll be making minor appearances throughout the story! And since the weather is changing, they needed some new outfits~ Yoichi and Taiga are dressed for the cool weather and looking stylish too! Like we mentioned before as well, they aren’t the only cameos you’ll see in Scoutmaster’s Season either, but you’ll have to stay tuned for more information on that later. 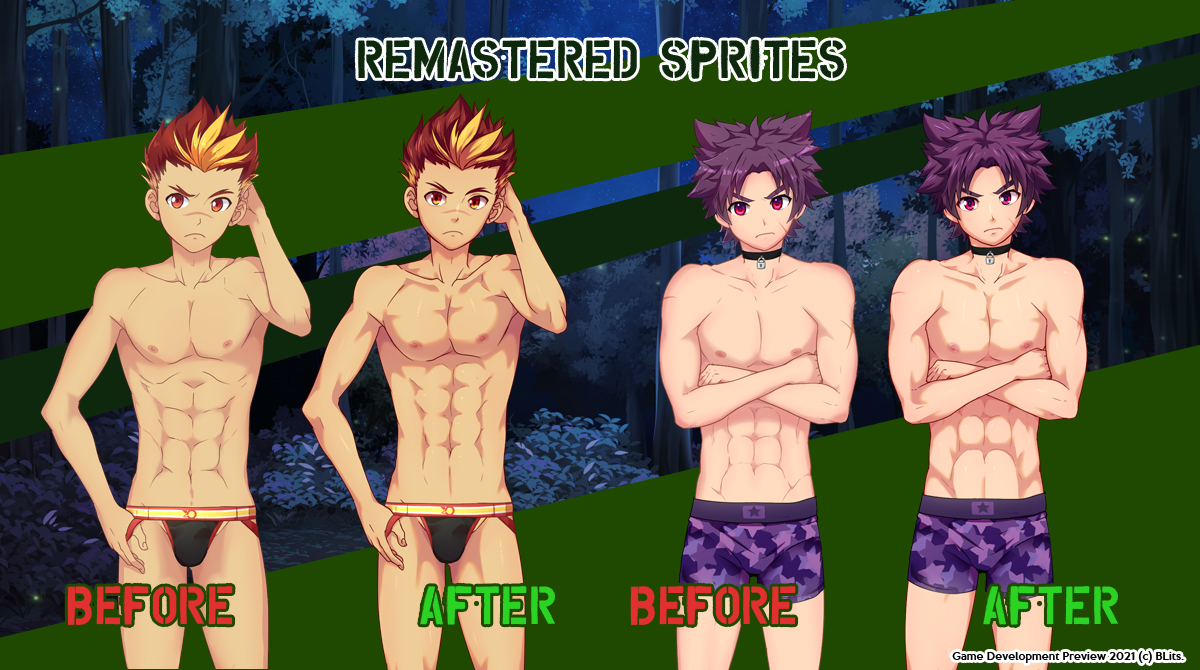 Please note that these updates are exclusive to Camp Buddy: Scoutmasters’ Season only.

Next, we’re super excited to show off the new characters that we teased in our last update, two more workers who have been hired by Clermont Inc. in order to update the camp! 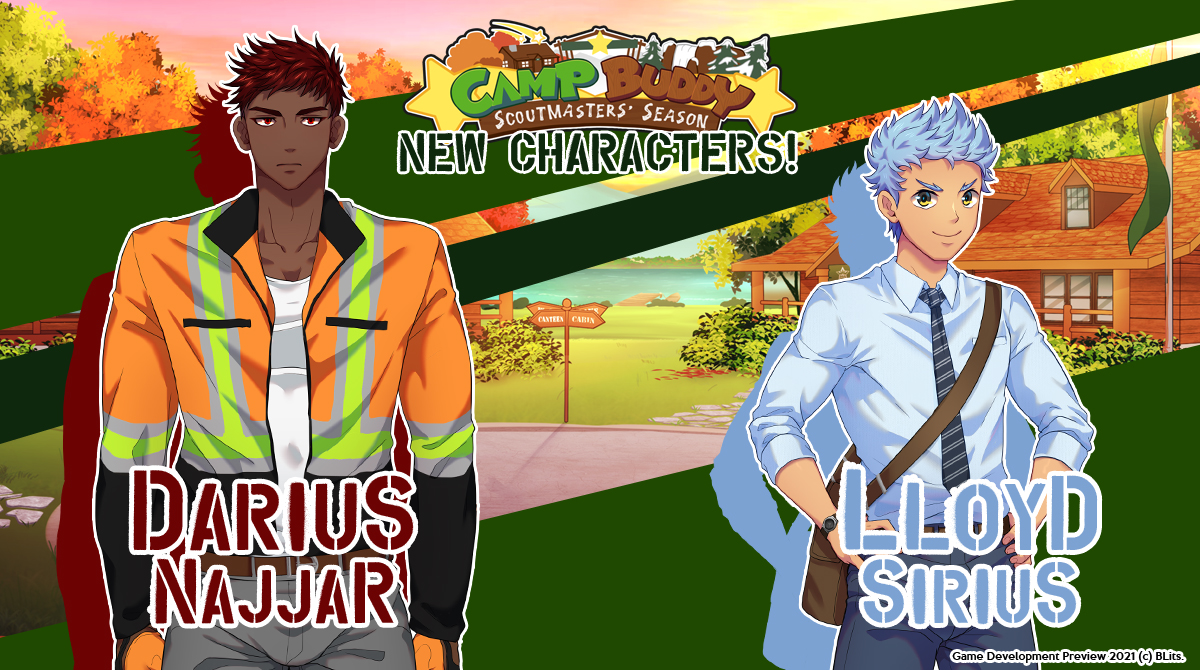 First up is Lloyd Sirius, an Architect with big ideas (even if he’s a little bit short). He can be eccentric at times, especially when it comes to his love of astrology, but his new co-workers will just have to get used to it!

Next is Lloyd’s partner-in-crime, Darius Najjar! Darius is a construction foreman who works alongside Lloyd to bring his designs to life. Tall, strong, and a man of few words, Darius can be intimidating to some, but he’s really a softie once you get to know him!

Both of these new characters will be featured in the first arc of the game, as well as Aiden and Goro’s routes, so you can look forward to learning more about them in game! In the meantime…

…All these new characters need brand new voices, too! We’re happy to announce that we’re seeking out voice actors for all four of the following new additions to the camp:

If you’re interested in voicing one of these characters, please fill out an application at the form below, and make sure to read the instructions carefully! In addition, if you’ve ever sent a voice actor application to us in the past, we’ll be happy to review that application again, but you’re also welcome to apply once more!

We’ll be taking in applications for these characters over the next week (until 12:00 PM EST 06/04/21), and hope to have a decision on all four by the end of June, so you can look forward to more news about their casting later!

That’s all for now buddies, and we hope you all enjoyed this development update! We’ll be back soon with more information regarding all of this, and we hope that you’ll stay tuned for news in the future! If you have any questions or concerns, feel free to ask in the comments below, or send us an email to [email protected] and we’ll be happy to help!

Thank you again for all of your support, and we’ll see you guys in the next update!

The girls pretty hot too

will you please kindly do this for us?

Any chance of bonus scenes of Goro getting with the campers? I guess Hiro and Keitaro are gone for the season, but still would love to see some action with Taiga or Yoichi? Love daddy-twink pairings!

How can I update my camp buddy app? Please someone tell me. Also I’m playing in android

I can’t wait for its release! I wish nothing but the best for BLits Good luck!!!

If Goro doesn’t have a bottom route I quit

If you’ve been checking out their character sheets you’d probably know by now that Goro is 100% top, Yoshinori is 50% Bottom and 50% Top, while Aiden is 70% Bottom and 30% Top. So I’m sorry to say that Goro can’t bottom hahaha I mean it doesn’t fit him tbh

The snow backgrounds give me Tesla’s Electric Mist 2 vibes and nostalgia, and it’ll all be in a VN!! Can’t wait to add this one to my collection.

Danggg I missed the auditions. Though I am a pure beginner with Voice Acting, I wanted to try Hyunjin’s role as I can speak Korean myself. Though I think my voice would be too deep for that kid. If there’ll be a scene where Hyunjin’s father is in the game, I’d be glad to give it a try.

Will there be other languages to play the game as well, like Italian, Spanish or any other European languages? (I’m italian and I struggle to translate english for too long) Then, will this game cost about the same as the first Camp Buddy? Will there be discounts for the two games or any merchandise?

Hello! I can’t promise you anything in regards to Scoutmaster’s Season, but I’m glad to inform you that we are working on a Spanish and a Portuguese translation of the original Camp Buddy! You can find out more about this in our previous news post.

just shut up and take my money

when will there be camp buddy in portuguese?

Yes, there will be a Portuguese translation of the original Camp Buddy! You can read more about this in our previous news post.

Really like this update post, wishing good luck and success for Blits and the new campbuddy DLC. Can’t wait for it to be finished. Also a lil bit of opinion, like the new sprites but i think Yoichi’s old face sprite is better there. But the sprites do look good tho

hope there will be route for naoto and those 2 new char. waiting for kieran route too lol or at least leaked scene

Can you fix the download for the demo. its not opening

When it’s gonna be full game and we can buy it ?

I need NAOTO as part of the game, he is so gorgeous

its amazing! is there any possibility of having another language option for the game?

Good luck to everyone who auditioned for a role!

I can’t wait the new update but I have one question. Dose Taiga’s dislikes have to change about Keitaro?

Ah, winter.. So, no more outdoor ‘activities’ I guess..

Good Day! I’m from the Philippines, I wanted to ask if a beginner nor No Experience in VA can also apply? I really want to try my luck if… And one last thing, are we going to make our own script to our chosen character? Just passing by…

I love the new Taiga, and Yoichi looks! And also, Lloyd is now a new favorite of mine. He kinda screams Blue Haired Hiro to me!

Nice. Absolutely love. Now I’m almost curious what the other scouts Autumn and Winter clothes might have been.

Looking forward to seeing how this goes.

Love this update, excited for new things to come. Do you guys ever plan on releasing the game through Steam as well?