Hey, buddies! We’re back with a detailed update regarding Camp Buddy: Scoutmaster’s Season. Please make sure to read all the details!

Nearly two months ago, we posted a development timeline to show our progress so far with Camp Buddy: Scoutmasters’ Season. We believe it gave a clearer and more transparent view of the current state of development and we plan to continue this for future announcements. Please check out below our progress since the last update!

As of right now, Aiden’s route has been 60% proofread and 90% reviewed and is currently undergoing its finishing touches before being fully cued and programmed! In addition, Goro’s route has been fully written and scripted, and will be undergoing a review as soon as Aiden route is completed within this week.

Completing Goro’s route will take some time to be reviewed and proofread as we want to ensure that equal treatment and care has been given for the writing of both routes. Nonetheless, the other departments will be moving alongside to escalate the progression.

Meanwhile, on the programming end, we’ve been hard at work coding the Aiden route as it has been developed and has finished about two thirds of the programming in the route so far. We expect to finish it shortly after the final proofreading phases are completed, and then will move on to Goro’s route as well!

While we were focused on writing our art department has tried to continue producing sketches and linework for mini-images, Scene Art (CGs), and Sex Scene Art (SXs), primarily for Aiden route so far. We’d also like to reveal some costume design sketches, check them out below! 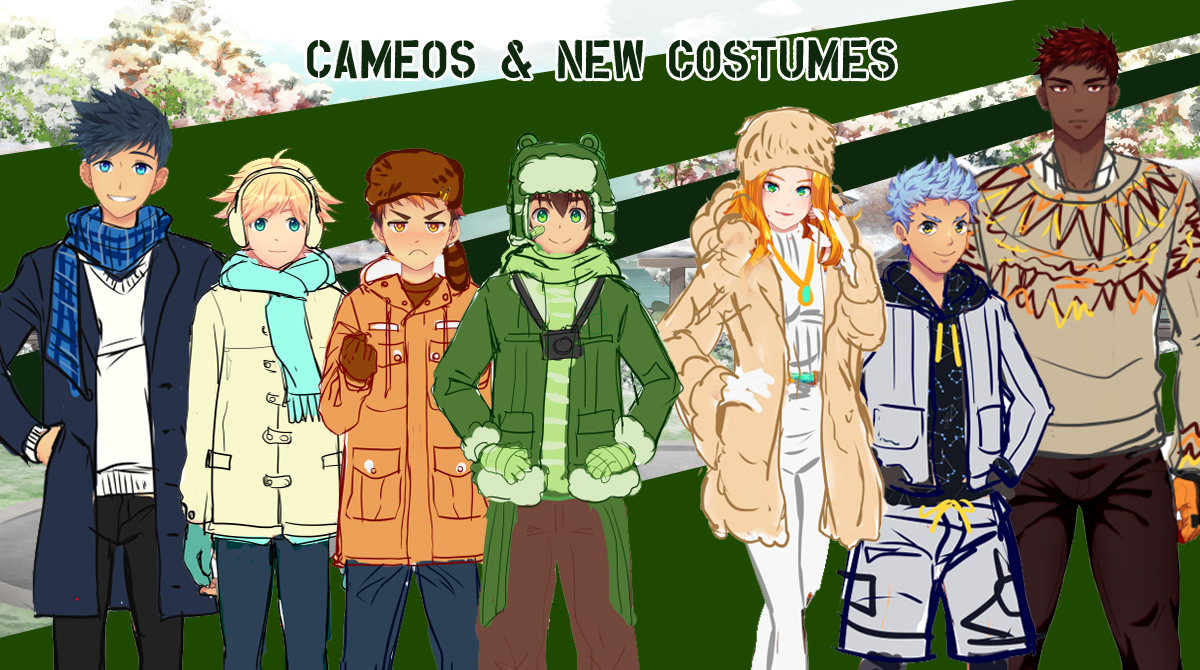 It’s confirmed! The other campers will be joining in for cameo roles in Camp Buddy: Scoutmasters’ Season! Meanwhile, our new staff seem to be rocking their own winter styles~! 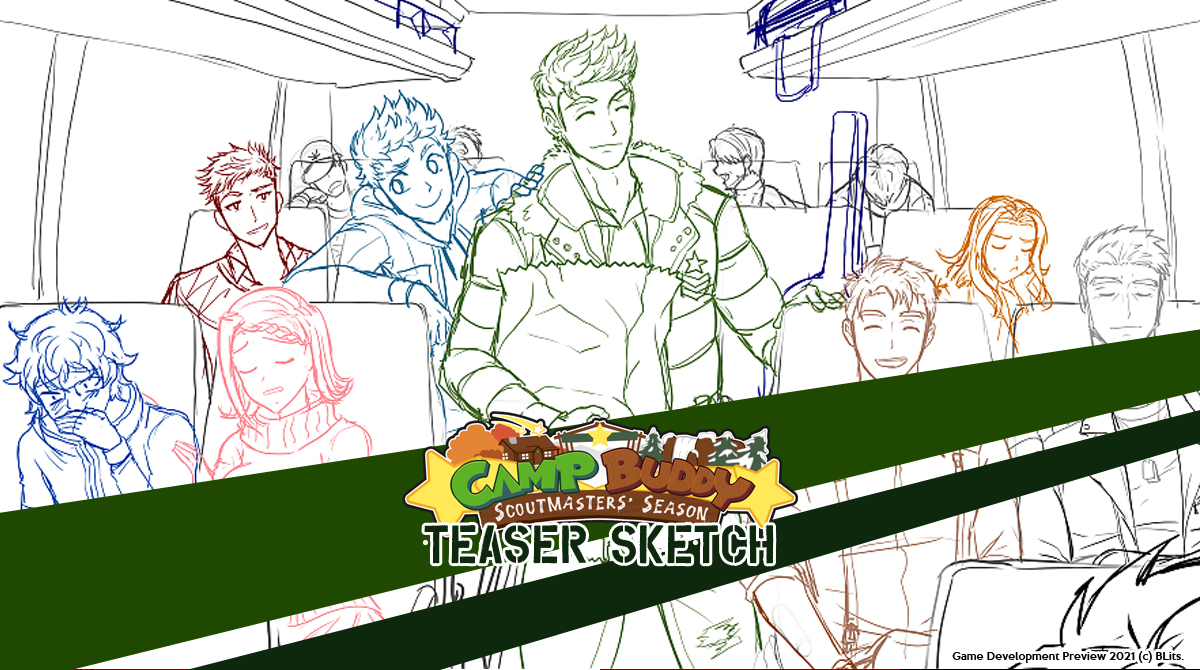 They look like they’re headed for a trip. I wonder where they’re going…? We would also like to update everyone that one of our team’s core members and artists, Chii, has chosen to depart BLits to pursue an exciting new career opportunity! We want to thank Chii for all of the hard work she’s contributed to not only Camp Buddy, but BLits as well, and we wish her the best of luck in her future endeavors!

For those fans of Chiaki as well, don’t worry, as Chii has chosen to leave him in our care, and he will maintain his status as a BLits Original Character that could appear in future works with us!

With Chii’s departure, our art department is down to two members, so we are interested in recruiting additional assistance for our art department, and are opening applications for skilled artists to assist us with the workload for Camp Buddy: Scoutmasters’ Season. If you believe you have both the skill and enthusiasm to fill a role with us here at BLits, as well as the willingness to learn and adapt to our team’s art style, please check out the link below and send in your application!

As we’ve shown our progress over the last few months, it has become clear to us that pursuing to release the game within the year would only be possible with a beta release in which it would require plenty of compromises to the overall quality of the game as well as an extremely tight schedule that would be imposed on all departments of our team.

Therefore, after an intensive review of the tasks left, and with careful thought and consideration, our team has decided to move our release window to February 2022. We understand that this is disappointing, but this deadline will give us a better timeframe to properly complete the development without rushing or removing content, as well as to give our team time to spend with our families and friends during the holidays. Rest assured, our working schedules remain the same, and every department will be working hard as usual in order to achieve this goal.

Thank you all for your understanding and patience with us, and we’ll do our best to continue updating everyone as we go.

We do have one more piece of news, though…

With the change in release date, we want to provide something that everyone can enjoy this holiday season, so we’ll be releasing a free second demo of Camp Buddy: Scoutmasters’ Season on December 17th, 2021 – just in time for the holidays!

The second demo will feature a segment of both Goro and Aiden’s routes, and there’s a surprise or two inside as well… We hope that everyone looks forward to it!

Thank you for taking the time to read this update in full, and that’s all for now, buddies! Please check out our second update today, featuring the Camp Buddy 3rd Anniversary giveaway, at the link below:

As always, if you have any questions or concerns, please feel free to email us at [email protected] or post a comment below, and we’ll be happy to help! We’ll see everyone again next time for our Second Demo release and more development news in December!

Do we have a official release date?

I can’t wait for the game! (I can take your time its just I’m super excited for it)
hehehehe﻿

When in February? In the end? Maybe in the beginning? In the middle?

How many will it be in February? In the end? Maybe in the beginning? In the middle?

I’ll definitely buy Scoutmaster Season, even though I’m not into daddies at all. I just want to support BLit’s games and really really hope a second chapter of Camp Buddy comes out. I’ll pay anything to see Hiro and Keitaro together again!

Lol, calm down you guys, the day just started, I know, and I’m just as excited as you guys, but let’s just wait patiently.

oh it’s beacuse I’m italian, so my hour is different
Anyway, I see that the v2.0 has come out, but if i click it comes the v1.0, idk why

They have til 11:59 PM and it will still beign December 17th

guys do you see the second demo?

where is the demo!!

im waiting for the demo where is it 🙁

This is unfair!
I am so really thrilled with Yoichi and Keitaro, I am expecting to read and see more picture of them when Keitaro came back to the camp and yoichi said that “the real torch-head, Tinkerbell and Mr. Perfect are inside” but it little did I know that that was the end!!!

As i was saying,How cruel!!

how exciting! cant wait, keep up the amazing work 😀

I only found out about this game recently, but I have totally fallen in love with it!
Can’t wait for more!

AHJAJEWJAJAWJSJDADSADASD EEEEEEEEEEEK IM SO EXCITED I CANT WAIT ANY LONGER

Thanks for the update, best of luck and the greatest of wishes to all of Blitsgames and campbuddy team. Hope it will be an awesome work. Love you all<3

I hope Naoto’s version comes out someday. How great would it be if it was translated into Korean?

right I don’t even remember hearing about the first one. 🙁

i’d have naoto route….hope it does

So Will this be a separate game we have to buy or is it a addon to the game so that once we have finished all the routes from the 1st game we can go onto the next routes with the scoutmasters?

Are there actually people wanting Goro route? lol I’d much rather have Naoto’s

Stop putting your thinking on others, you don’t want it? We do, people are just weird af, your fetish doesn’t matter to us, you don’t want that, back to camp buddy version, don’t be around here.

Yes. There are people wanting the Goro route. Gramps is hot and Gramps is packin’. Plus, there’s so much they can do with the Goro storyline.

And if they add a Naoto storyline eventually, I’m all for it.

It could be perfect if Goro was 30 years younger.
A hot-young-masculine guy with a white hair.

I have daddy issues

We hope that you will make a expansion for Naoto(Natsumi’s brother) route.

I tend to love sketches more than ready-to-go art lately. Good job with those! I wish there was a sketchy version of the game with just sketches all around. Or at least an art book with sketches from your amazing artists.
P.S. You better give Natsumi a HUGE cameo part. Can’t imagine campgrounds without his 9″ charisma blue eyes 😛

The demo version will be released on December 17th. I’m really looking forward to it. It’s a pity that it can’t be translated into Korean, but I’m willing to use the translator. It is regrettable that the release date has been delayed, but I hope it will return to its perfect shape.

I’m really excited and happy that BLits Games is making new content but I’m also wondering how much this game will cost, because if its same price as the original Camp Buddy then is it really worth the cost considering there’s only 2 possible routes. But whatever the price will be I’ll most likely buy and enjoy it 😀 😉

When will you release the Naoto DLC 😀

It’s sad that that the release window was pushed back, but it’s understandable. Nonetheless, I’m still very excited lol.