Hey, buddies! We’re back with a brief update regarding Camp Buddy: Scoutmaster’s Season, primarily about storywriting progress and discussion on development timeframe. Please make sure to read all the details!

It has been a little over a year since we first announced the beginning of development of Camp Buddy: Scoutmaster Season and we’ve decided to be more transparent with our progress through this update post to give everyone a clearer understanding on how things has progressed since then. 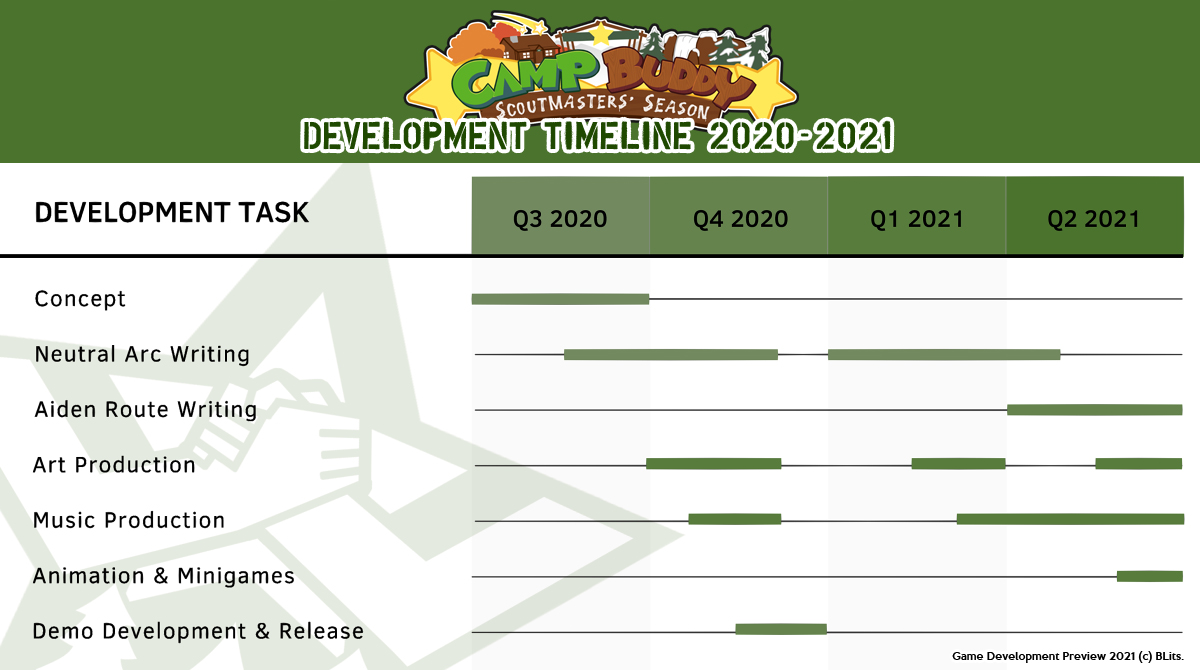 From the chart, you might all notice that out of all the tasks, it’s writing that has taken most of our time so far. This is due to Scoutmaster Season giving us a new challenge to expand the character lore beyond how the cast were portrayed in the first game. From our initial concept of this game many years ago, we were only planning to make the expansion a very short game that only revolves as a parallel timeline to Camp Buddy, but we realized that would not give enough justice to the potential of their own individual stories to tell, thus we took our time to make sure to dig deeper and give the two pursuable routes, Goro and Aiden, their own plot concept and backstories – which is why from the demo, we see a hint of a flashback that we’re planning to expand further and tie together with the story that occurs in their present timeline.

This did not come without challenge, though. As Yoshinori, Goro, Aiden and Yuri were already existing characters prior, we had to make sure everything was still as consistent, especially since we were dealing with situations involving the past, present and future. It presented us with a lot of plot limitations with which we struggled, but eventually managed to work around. While it was difficult, this was the same process we’ve gone through when we wrote for Taiga Route alone, which took about six to seven months to complete.

We had to make sure that Scoutmaster Season, despite its limited cast and off-season setting, would be able to recreate interesting events and character dynamics amongst each other, alongside the newly added supporting cast (Hyunjin, Emilia, Lloyd & Darius). As the characters are older, they faced different sets of challenges and problems in order to make their development more realistic. We gathered the themes and ideas that worked best from Camp Buddy to stay true to what fans had loved from the game.

We hope these efforts reflect well into the final product. We are excited to bring everyone the fruits of our hardwork!

Back in 2020, at the height of the pandemic, our core developers who are mainly in-charge of writing were displaced for several months causing a slow-down on overall production – resulting in the development only beginning in August 2020 and the Neutral Arc Writing taking more time than it should. While this continues in 2021 from the locations of our artists and writers, we are ensuring the physical and mental health of our team are at top condition to be able to perform creative tasks and provide only the best quality for the game.

We will continue to prioritize writing above all other departments as the majority of the game content (art, voice acting, animation, programming) heavily relies on the story being completed. Rest assured; other departments are moving steadily alongside the pace of writing.

On a brighter note, we now want to give a closer look at how development has transpired over the last three months. 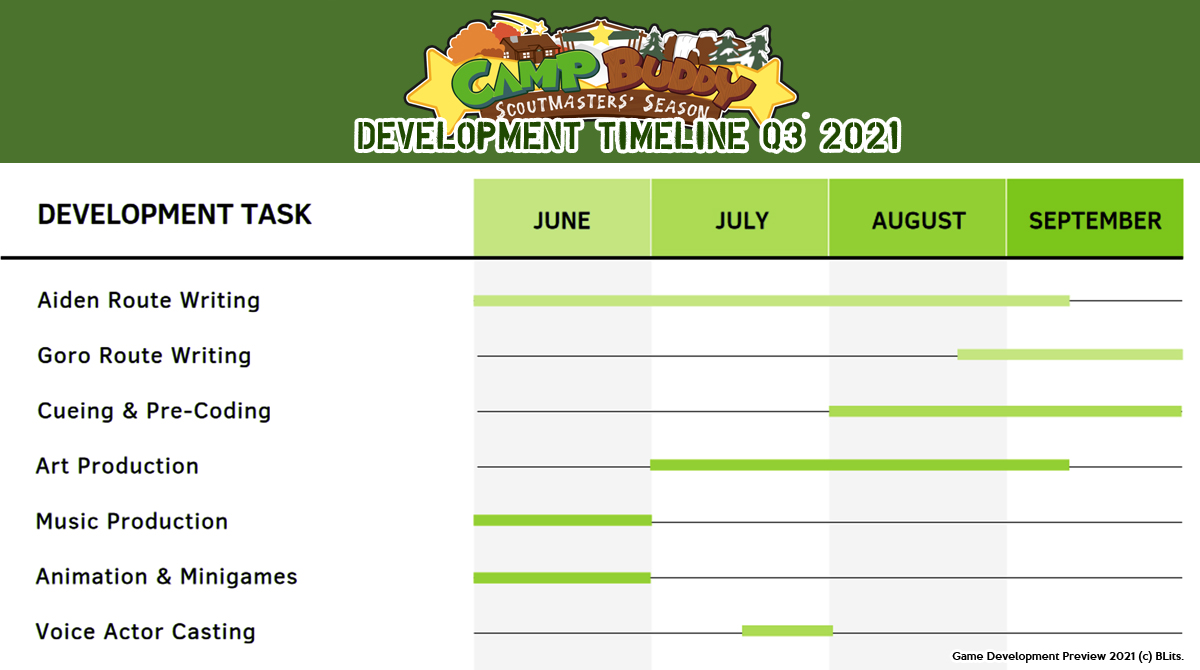 As of right now, all of Aiden’s route has been both storyboarded and scripted and is currently undergoing reviews and then proofreading before it is ready to be programmed! In addition, Goro’s route has been fully storyboarded, and is already undergoing the raw writing stages before being reviewed. We gained good momentum from finishing Aiden’s route, and we have a better grasp of the story writing process for Goro route now without the need to start from scratch.

With our current pace, we hope to finish all story-related tasks by within a month, as there are common scenes from Aiden route that we can take pattern from! In the meantime, while the story is being developed, we are already beginning the programming stage, with Arc 1 and more as the story progresses.

In addition, speaking of proofreading, we’d like to welcome a new member to our team – Tatsutahimet as our additional proofreader for Camp Buddy: Scoutmasters Season, and we look forward to their work with us from here on out!

Next, our art department has been working hard on the various mini-images, Scene Art (CGs), and backgrounds that are planned for release in Camp Buddy: Scoutmasters Season. You can see some preview sketches below: 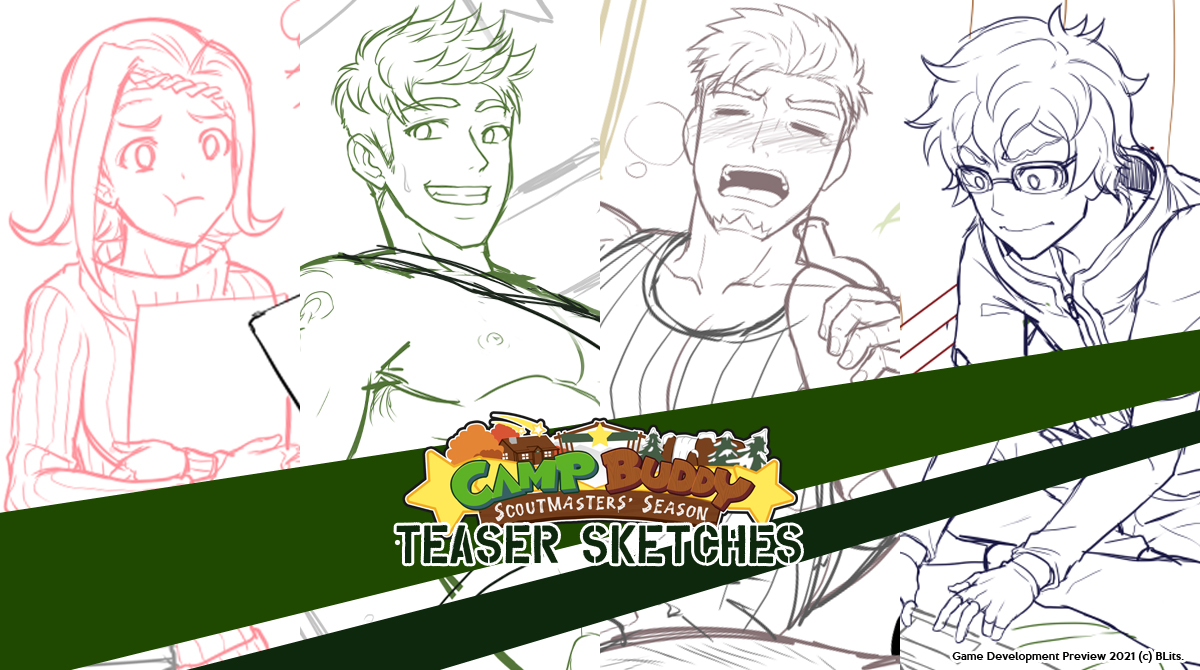 We do have more to show but we don’t want to spoil too much! At the moment, we are planning to work on producing the rest of the art for Camp Buddy: Scoutmasters Season immediately after the completion of story tasks.

While we are focused on story work, the animation department is currently waiting for assets to begin animations. Because of this and the timeframe we have, we have elected to animate only crucial scenes for the initial release of Camp Buddy: Scoutmasters Season, just like we did for Camp Buddy and Taiga Route DLC – the remaining animations will be released as free updates, along with other additional features after the main release of the game!

With all of the above in mind, our team is still working our hardest to release Camp Buddy: Scoutmasters Season within this year, 2021. We are on a tight schedule and many of our core developers are still in the midst of the pandemic, resulting in unforeseeable events and challenges in production, so we ask for your understanding.

We’ll let everyone know as soon as we feel more confident with an exact release date, or should the situation change. We’ll also be sure to post another development update by the end of October at the latest, so please stay tuned for that!

Thank you for taking the time to read this update in full, and that’s all for now, buddies! We’ll be back with an Anniversary Celebration for BLits’ in the month of October, as well as an update regarding Camp Buddy’s Spanish and Portuguese translations soon!

As always, if you have any questions or concerns, please feel free to email us at [email protected] or post a comment below, and we’ll be happy to help!

Are the images you are selling going to be the ones used in scoutmasters season or are they going to be different?

So happy to hear and see this update, i think another demo for scoutmaster season and review from the people could be beneficial for the final product. I wish all the best for the Blits games crew and creator. Keep up the good work and love you all.

are we gonna have the same mini-game or we’ll have an other one different?

I want natsumi’s brother. I want his route.

As much as I love Natsumi’s character, his brother Naoto I don’t like at all. I don’t get it how this jerk can be ‘better than Natsumi’ in every way. Naoto’s character looks contrived to me. The part of the story with him being at the camp ‘helping around’ was the worst part of the story. I really don’t want this guy to come back.

Is the physical journal still on hold for the same printing reasons as the June, July, and August Yaoi Crates? By the way. I finally got mine in today.The August Yapi Crate x Camp Buddy Collaboration? Yeah. That one. I love it. Every is so damn cute.And very teasy too heheha. I about died. Not gonna lie. I have been a Mr. McGiggleswoorth since I woke up. I am no pun intended..a very happy camper today ahahaha. See what I did there?Heh 😏

Is the game going to be played on mobile?

Pandemic is everyone’s excuse for anything. You better hurry up, slowpokes. Scetches don’t look bad. That’s all you need to know. Now, get to your work!

Come on, health comes first, and at the same time, rushing doesn’t do any good, only enough time produces good work

I look forward to everything. Congratulations on the incredible work. Love love

Same with money 💰 of course

Super excited for everything. Don’t stress too much. Take a good brake as much you guys can! <3

Just looking at the sketches, I already know the second game is gonna be dope! Keep up the amazing work 😀 Thank you for everything!

Please do not rush yourself, I want a game that is taken time and almost bug less. Don’t put too much pressure on yourselves because it can lead to things being overlooked or either cut from development or accidentally ending up with a product that you’re not satisfied with. But overall to stop the rambling, I just want you guys to keep up the amazing work, you guys are doing great things and have wonderful story telling ability.

Thanks for the transparency! Always love to see it from development companies, and I’m a sucker for a good timeline visual 😀

ooof v excited for this<33